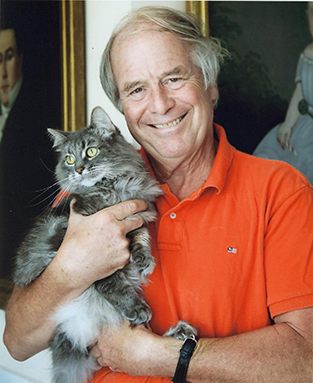 Steven Kellogg was born and raised in Connecticut with his three sisters. Inspired partially by a fascination with picture books, he fell in love with writing, drawing, and storytelling at an early age. Kellogg’s particular interest in animal stories was expressed in the creation of stories of his own. He would sit between his sisters with a stack of paper and a pencil rattling off tales, scribbling illustrations to accompany them, and then rapidly passing the pictures around. He credits his preschool love of books and his enthusiasm for illustration to his determination to make drawing the center of his future career. He continued drawing throughout his school years and went on to get a bachelor’s degree in fine arts from the Rhode Island School of Design in 1963. He majored in illustration and was particularly interested in the few projects he did that were related to the creation of picture books. During his 50-year career, Kellogg has published approximately 120 books and has visited thousands of schools, libraries and bookstores, where he has presented programs that are centered around a love of books and the magic of stories.

Kellogg continues to be a passionate advocate for animals and literacy. He has organized fundraising campaigns for his community’s regional animal shelter and is a vice-president of the National Children’s Book and Literacy Alliance, a national nonprofit organization that supports literacy. Kellogg’s books have received numerous awards over the years, including the Regina Medal for his body of work and the Alumni Award from the Rhode Island School of Design for outstanding professional achievement. Among his most recent work is a rewriting of Pinkerton, Behave! that eliminates the revolver brandished by the burglar in the original edition of the book. Other recent works include The Green Bath (Scholastic), Farty Marty (Harcourt), and Snowflakes Fall (Random House). Kellogg lives in an early Vermont barn that they moved to a wooded knoll on the shores of Lake Champlain in upstate New York, where it was converted to serve as his home and studio. At this point, his children (to which most of his books are dedicated) have grown up and are adults living with their families throughout the United States. Kellogg is a proud great-grandparent.